BRITAINS SHOP VACANCY DROPS TO ITS LOWEST LEVEL SINCE DECEMBER 2009

Britain’s shop vacancy dropped to 12.4% in April, the lowest since December 2009, according to figures released today by the Local Data Company. This is down -0.6% from the same time last year (April 2015) and was driven by a decrease in the number of units becoming vacant (down 16% from April 2015) along with an above average number of units being removed from the overall stock (+76%, when compared to April 2015).

Analysis of vacancy rates by occupation type compared to the previous month shows that Shop vacancy in April was 12.4% (-0.1% change), Leisure vacancy was 8% (-0.1% change), and All (Retail & Leisure) vacancy rate was 11.2%( -0.1% change).
David Walton, head of retail at Harris Lamb, said: “This is good news nationally. It shows the strength in the retail sector and generally re-enforces that people are spending money on the high street.
“The most interesting figure of the research is the drop in long term voids. There has either been a positive movement of retailers into these units or landlords have actively sought alternative uses. Either way it is another positive for the high street as vacant units detract from the retail experience.”

All Vacancy rate by location type (retail and leisure)

Shopping Centres
The GB shopping centre vacancy rate (13.2%) dropped by -1.4% in April 2016, when compared to the same period last year (April 2015). The North East (-2.8%) and Scotland (-2.3%) saw the biggest fall in their vacancy rates across the GB nations and regions, a similar pattern to March. Wales was the only area to see a rise in its vacancy rate of +2.0% in the last 12 months since April 2015. The South West saw no change in the last 12 months (14.8%), although this was a similar pattern across retail parks and town centres as well.

Retail Parks
Retail park vacancy rates across all of the GB nations and English regions varied in performance. The North East and West Midlands saw a significant improvement, with a -3.3% and -3.5% decrease in vacancy respectively in the 12–month period (April 2015 to April 2016). The Midlands is seeing the biggest improvement in vacancy rates, with the East Midlands also seeing a drop of -2.1% in the last 12 months. Further north, Scotland was the only region to see an increase, with the vacancy rate rising from 7.6% in April 2015 to 8% in April 2016.

Town Centres
The town centre vacancy rate dropped by -0.2% to 10.7% for the first time in three months. Compared to 12 months ago, the vacancy rate decreased by -0.5% from 11.2% in April 2015. Scotland was the only region/nation to see an increase in its vacancy rate of +0.8% in the last 12 months (since April 2015). This the second consecutive month that Scotland has been the only region to see an increase, with the increase also up from +0.5% in March to the +0.8% in April. 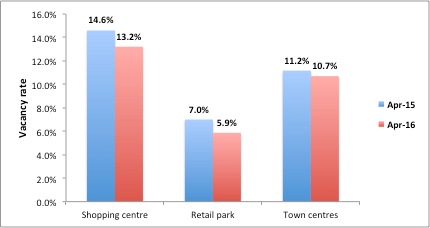 All vacancy rates by location type in April 2016 (Source: LDC)

Persistent vacancy decreased in April, when compared to March 2016, with the number of units vacant for over three years across GB town centres falling to 11,839 units. This is down -2.8% from the start of the year (12,174 units). 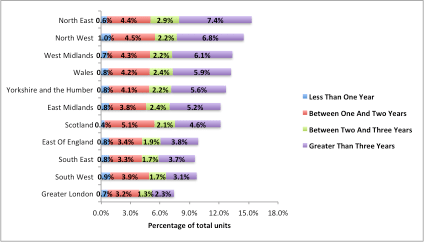 Skelmersdale has the largest percentage of units vacant for longer than three years, with 31% (113 units) of the total units vacant for this period of time. The North West had the most representatives in the bottom 10 (Skelmersdale, Walkden and Bacup). 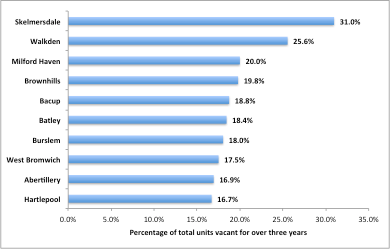