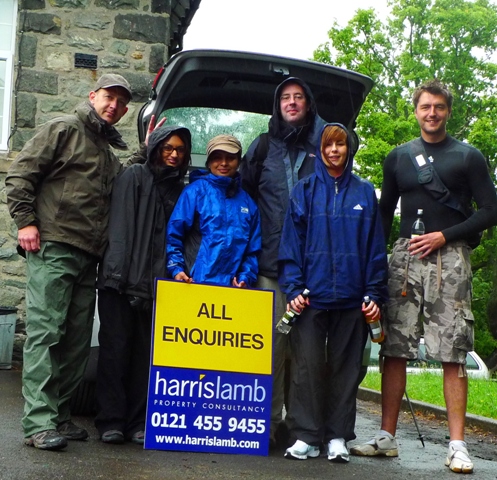 On Saturday an intrepid band of Harris Lamb employees embarked on The annual St Basils Walk.

St Basils is a charity whose aim is to prevent youth homelessness by providing accommodation and support services and currently has 27 accommodation projects across Birmingham and North Worcestershire, providing supported accommodation for young people aged 16 to 25.

So the ‘Barmouth Estuary Challenge’ provided a worthy challenge of 2 circular walks, 13 and 27 miles, both starting and finishing in the beautiful welsh town of Dolgellau. Having initially decided on the longer route, plans were swiftly changed thanks to heavy rain and mist so that the, not inconsiderable, ‘shorter’ distance was decided on at the last minute.

500 walkers took part and the event was excellently organized and supported by a number of volunteers.

Thanks to not really studying the map as well as we should have (and blame lying firmly with the team captain – yours truly) we quickly got lost within the first half mile! Fortunately and thanks to a random walker from Wolverhampton sporting a fetching jumper and aged Dog – who was though remarkably dry given the torrential rain – we were soon pointed in the right direction, taking us steeply upwards through what looked like a tropical rainforest.

We knew we had returned to the official path when we were confronted with a large group of walkers who had all bunched up on a boggy field which, after our passing, had turned into ground conditions not dissimilar to the Somme. Interestingly, conversations with some of them revealed they too were from Wolverhampton..

Thereafter progress was good and despite on going rain we made it to the first checkpoint where chocolate, water and a sympathetic ear were in plentiful supply.

The plan after this check point had been to ascend Cadair Idris, a steep and moody looking beast of a mountain, but thankfully the thick fog meant that ascent was not allowed, which, to be honest was a relief given our navigation skills.

Onwards to the beautiful Mawddach Estuary, which took us past a lovely babbling brook. Unfortunately the beauty of this part of the path was slightly spoiled by the fact it wasn’t on the official route and thanks to a couple of locals in a 4 x 4 we were tactfully pointed back in the opposite direction. Had we continued we would have ended up, after a large circular route, back at the checkpoint!

Now on the straight estuary path (an old railway track) it was impossible to err further and with the Marvelous George III Hotel/Pub in sight the pace quickened in anticipation of a cheeky pint before walking the last 4 miles back to the start.

Despite missing out the mountain section we calculated that thanks to our detours we pretty much walked the shorter route and spirits remained high as we entered HQ to the sound of applause from other walkers.

All in all a well organized and worthy event which next year is being held on the 9th June in the Malvern Hills.

Would you like to know more about Harris Lamb’s Charity events? Contact Andy Lamb on 0121 455 9455 or email andrew.lamb@harrislamb.com.

Disclaimer: The views expressed within this article or weblog (‘blog’) are the personal views of the contributors and authors only and do not necessarily reflect the views of any named companies or thier employees.