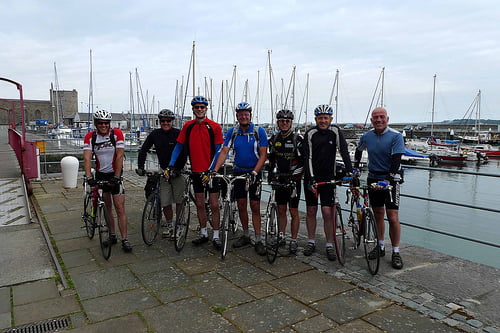 Idle chat about ‘doing another cycle’ following a London to Paris cycle a couple of years ago can lead to some extreme ideas! And so four Directors of Harris Lamb set off for a long weekend in June to cycle from Holyhead to Chepstow, through Snowdonia and the Black Mountains, over a period of three and a half days.

Neil Harris, Andy Lamb, John Williams and Gert Corfield were joined by David Betts,  Andy (Grovesy) Groves of Towler Shaw Roberts and Kevin Foreman of Bridgehouse Property Consultants to take on the challenge ‘just for the fun of it’!

Day one involved a train journey to Holyhead and as predicted the cycle carrying policies of the various train operators left everyone confused so it was a case of ‘try it on and see’ resulting in everyone eventually making it to Hollyhead.

Stage One from Holyhead to Caernafon over the Menai Strait and Suspension Bridge was a windy but enjoyable leg warmer for the next few days to come. The need to find a public hostelry showing the England game against Slovenia was an added challenge in Wales, however thanks to some friendly locals we were pointed in the right direction and made it for the second half. The silence in the pub when England scored was deafening so one of our party decided to cheer extra loudly to make up for it. We cycled fairly quickly away from the pub that afternoon!

The last 6 or so miles into Caernarfon was along a disused railway line and brought views of the estuary in the late afternoon sun making a splendid end to a fairly relaxed 38 miles on the first day.

Stage Two. After sampling the delights of the Black Boy Pub the night before and a hearty breakfast courtesy of the ‘all you can eat’ ticket from the Premier Inn we set of for Dolgellau approximately 65 miles away. The journey started pleasantly along the continuing disused railway line until a tire blow out brought proceedings to an abrupt halt. The scene of everyone having a go a changing an inner tube and repairing a split tire was duly photographed and we set off again. A very helpful cycle shop owner in Porthmadog provided a new tire and whilst repairs were carried out refreshments were taken at the Tafarn Pencei Cafe Bar, which was actually a pub overlooking the Marina. This made it a little difficult to get going again but we were soon motoring out of Porthmadog over the first of some very strenuous climbs. During the downhill of the first, just outside Harlech, the same (and new tire) on Mr Harris’s bike blew again. The remaining party bar one had powered on unawares of this unfortunate incident and as it happened in the middle of now where involved Mr Harris organising the delivery of a new tire by taxi from the previous cycle shop and a lift in and unmarked and windowless transit van to Harlech!

Eventually all met up at the splendid George III Hotel on the Maddach Estuary just outside Dolgellau and to celebrate a days adventure over steep mountains, tyre incidents and the wonderful scenery of the estuary under blue skies a few local ales were consumed along with the odd glass of red wine. This made the last couple of miles into Dolgellau to the nights accommodation at the Royal Ship a rather interesting journey!

Stage Three. Blue skies greeted us again as we set off from The Royal Ship, the running of which was reminiscent of Fawlty Towers although the breakfast and service was excellent! Silence descended on the peleton as, within short distance, we hit a steep hill which turned into an even steeper and longer hill. This had us strung out along the road with those who enjoyed the light weight of full carbon fiber and reasonable fitness at the head of the pack and those with too much luggage and to little fitness pushing bikes some way behind. I am assured the scenery was splendid but due to the constant stream of sweat was unable to see much of it!

The resultant split in the pack meant that the destination of Builth Wells was reached by different people using slightly different routes. Rayader was the next meeting point for most and for the lucky few that were able to re fuel thanks to John William’s in laws splendid cakes the journey completed un eventfully but enjoyably at the Greyhound Pub in Builth Wells after completion of a hard 75 miles.

Stage Four caused some concern after the previous days hard climbing as the map showed a sortie through the black mountains beyond Haye on Wye and onwards to Abergevenny and the final destination, Chepstow for an early evening train home. This did not dampen the consumption of more local faire the night before and re counting of individual adventures of Stage 3 ! In addition we were joined by the son and his mate of one of the team who with their lack of luggage and obvious fitness and resemblance of tour de france contenders were unlikely to break into a sweat on the day.

A slight re-routing of the suggested route was agreed upon which involved a large and steep section of A road ultimately into Abergevenny which after some initial quiet country lanes was a shock to the system. Having survived the fumes and noise of the dual carriage way a rest and refreshments were taken in and we set off in good time through more beautiful lanes to Chepstow. Arrival came after nearly 75 miles were completed. The challenge then ensued in convincing Arriva Wales to allow 9 bikes on the train when their policy is only 2 but thanks to a station master (who resembled a character out of ‘Oh, Dr Beeching!) we managed to shoe horn everyone into the next train out of town.

All in all a fantastic trip which showcased the beauty of Wales and the friendliness and helpfulness of the Welsh people. Highly recommended – although worth doing some training beforehand!

If you have an enquiry or question about Harris Lamb’s Property Management Department, or if you would just like to speak with Gert, please feel free to contact him on +44(0)121 4559455 or email gert.corfield@harrislamb.com.