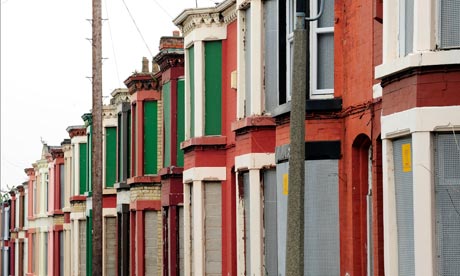 A couple of pieces in the news last week that I thought were at first largely unconnected but after some reflection made me think were probably, once pieced together, something very much connected and something that needs a great deal more thought and action. Unsurprisingly the 2 items are at the centre of much of the consultancy and agency work with which we are involved with on a day to day basis at Harris Lamb.

The week started with a compelling edition of Panorama which for those who missed it was about the scandal of the UK’s million plus empty homes. The programme pointed out that in part this was the fault of successive government’s poor policy and especially the last governments ‘Pathfinder’ plan which set about clearing old houses to replace them with new ones when in practice it only really had an effect in clearing whole areas of secondary housing stock. The programme argued very well that with a little bit of imagination and not too much money that many of these houses could be refurbished and put back into use in an economical fashion.

One of Panorama’s memorable ‘factoids’ was that Liverpool Council spent £1m last year on security for empty homes when their housing waiting list had 21,000 people on it.

The message was the scandal of having such a high number of empty homes when the housing shortage is so bad in many areas and that there is not enough if any incentive, to match empty housing stock to the people in need of a family home.

Whilst Panorama seemed to conclude as with many a problem that ‘ the government should do something’ it is surely time for the Industry to lobby harder to help solve some of the housing issues with a little more thought.

The 2nd piece of news was that Bellway Homes reported last week that they had ‘a surprising’ rise in sales with sales up 14% over August – November compared to the year previously. Not bad at all! Bellways Finance Director commented that activity was ‘remarkably resillient’ against the backdrop of events in the World’s economy.

Bellway used to focus on first time buyers and city apartments but is now focusing on ‘more expensive family homes’ Bearing in mind Bellway reported a 51% rise in full year profits this is, on the face of it, a housebuilder meeting market demand very well.

This brings me to the point of connecting these 2 news items. With housebuilders having repaired their balance sheets and making money, is now not the time to engage with them in a transparent and very public manner to use their expertise; skills and ‘clout’ to help bring into use far more of the UK’s redundant housing stock.

From our experience particularly in Stoke-On-Trent with ‘Renew’, it is the private housebuilders who were too often turned away when they should have been engaged and partnered to help stimulate urban renewal.

Andy is a regular contributor to Harris Lamb’s blog section and would be keen to receive your feedback on any issues raised in this, or any of his previous blogs. To speak with Andy about this or any aspect of Commercial Property, please contact him on 0121 455 9455 or email andrew.lamb@harrislamb.com.