HARRIS LAMB RAISES MORE THAN £5,000 TO SUPPORT VULNERABLE VETERANS IN THE CUMBRIAN CHALLENGE

Six fund-raisers from Harris Lamb are celebrating after completing a 21-mile hike through the Lake District, raising over £5,000 for Walking With The Wounded.

The Cumbrian Challenge is Walking With The Wounded’s flagship, annual fundraising event in the Lake District, whereby each team taking part pledges to raise a minimum of £1,000 to support a wounded veteran back to work. 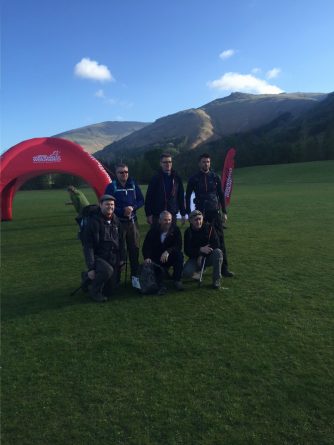 Ready for the off!

Tom Morley, who completed the challenge in 10 hours with colleagues Andy Lamb, Andy Groves, Gert Corfield, Charles D’Auncey and Robert Pinks, said: “This was a tough challenge, but one that was in aid of a very worthwhile cause. Walking With The Wounded was set up six years ago, and raises funds for the re-education and re-training of wounded servicemen and women who were forced to leave the Armed Forces as a result of their injuries and were not prepared for the move from one career to another.

“WWTW helps fund training and education to help them find a career, so that they can support themselves and re-build a life in the civilian workplace, while also providing a support network to all injured veterans,” he said.

Harris Lamb’s 31.5km hike took the team through the steep and rocky Eagle Crag with climbs over High Raise (762m), the Langdale Pikes, Thunacar Knott (723m) Harrison Stickle and the Pike Of Stickle (709m), high above the Langdale valley. 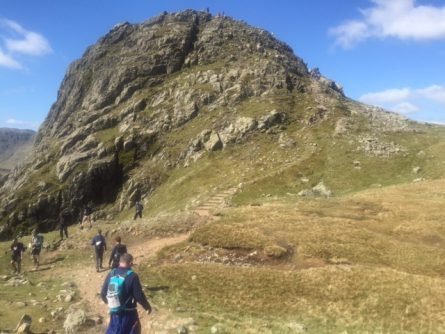 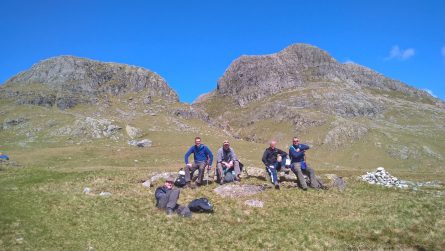 Tom added: “Hot temperatures and some pretty steep ascents made it a very challenging day, but we were pleased to be one of the few teams who completed the toughest of the three routes on offer. 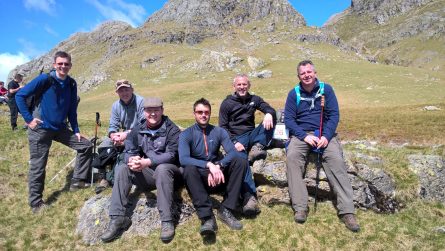 Taking a bit of a breather… 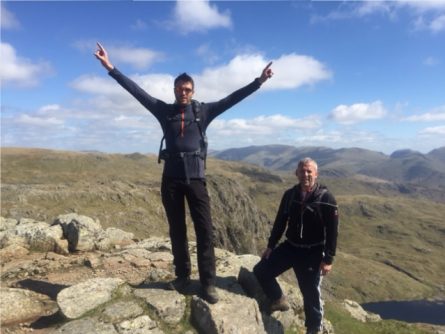 A record 160 teams took part in the Cumbrian Challenge, taking on one of three challenging routes in spectacular conditions, alongside beneficiaries of the military charity and previous members of its fundraising expeditions to Everest and around Britain.

Each team taking part can support another wounded veteran back into employment and already this year’s event has raised well over £140,000 with many more donations still to come in.

Several beneficiaries were in the beautiful Cumbrian Fells for the event, including Mark Appleby, 44, who served in the Duke of Lancaster’s Regiment for 25 years, including tours of N. Ireland, Bosnia, Iraq and Afghanistan, and Peter Mayhew, 60, who served in the Royal Electrical & Mechanical  Engineers for 8 years including time in Germany and  N. Ireland. Both have been through WWTW’s programmes on their pathway back to independence. The event was won by a team led by the officer in charge of military forces in Sierra Leone. 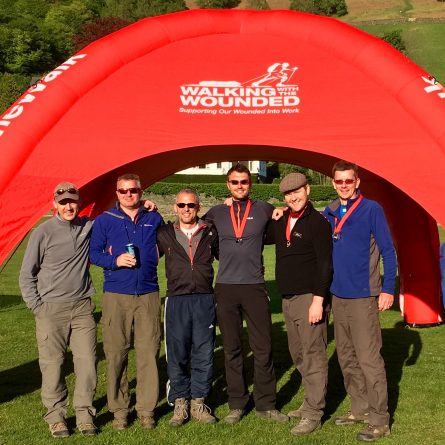 A job well done: the team as they complete the course.

The team can still be sponsored by visiting: http://uk.virginmoneygiving.com/fundraiser-web/fundraiser/showFundraiserProfilePage.action?userUrl=harrislamb&isTeam=true