CYCLING TO RAISE AWARENESS OF SEPSIS

One of Harris Lamb’s most frequent fundraisers will be back in the saddle this weekend as he cycles from Sutton Coldfield to Cardiff to raise funds and awareness of Sepsis. 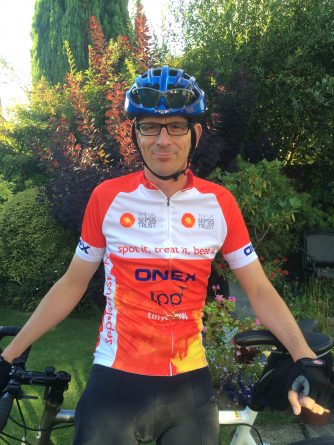 Pedal Power: Andrew is ready to raise cash and awareness for the cause

Andrew Groves will cycle 147 miles from Good Hope Hospital to meet up with other cyclists from around the UK at The Senedd, Cardiff, The bike ride is to support the work of the UK Sepsis Trust in raising awareness about the 44,000 people who die in the UK every year from Sepsis and Septic Shock.

Sepsis is a life threatening condition that arises when the body’s response to an infection injures its own tissues and organs. Sepsis leads to shock, multiple organ failure and death especially if not recognized early and treated promptly.

‘Team Sollis’, which includes survivors and relatives of Sepsis patients and several doctors and consultants who have treated patients with this condition, will leave the hospital on Saturday morning.

Andrew said: “I didn’t know a great deal about Sepsis until I got involved with this, but since speaking to former patients and medics, I’ve realised how many cases there are, and the staggering number of people who die from the condition every year.

“I’m hopeful that we’ll hit our £2,000 target and make a decent contribution to helping to fund research and treatment into Sepsis, while also raising awareness as we go. We’re cycling 100 miles on day one, which personally will be quite a challenge!”

To support the cause, visit Team Sollis’ JustGiving page: https://www.justgiving.com/fundraising/TeamSollis-Midlands