FLYING THE FLAG FOR A VIBRANT WEST MIDLANDS

Creating a vibrant economy in the West Midlands was the topic of the week for Harris Lamb’s lease advisory surveyor Abi Taylor.

Abi was asked to attend an event hosted by business and financial adviser Grant Thornton as it published the results of a new index measuring how the towns and cities of the West Midlands stacked up against one another. 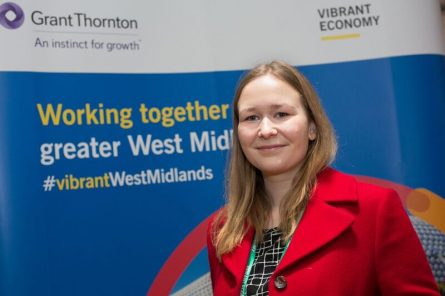 Abi said: “This was such an insightful event – I was very much flying the flag for Birmingham throughout, and the longer I spent meeting others from the region, the more proud I felt to live and work in the second city.

“The emphasis of the day was on identifying the good things about the West Midlands as a whole, and exploiting these things to move forward. There was a positive buzz throughout, and I think most people left feeling, like me, proud to live and work in the West Midlands. Guest speakers from HS2, West Midlands Combined Authority and Birmingham City Council, along with Q&A sessions from the mayoral candidates for the Conservative Party, Lib Dems and Green Party instilled a real passion for the region.

“Grant Thornton encouraged all guests to engage and discuss the great things going on in Birmingham – it wasn’t hard… the arts and culture, the food, the diversity, the professional services industry, the manufacturing heritage and industry, the connectivity and location of the West Midlands, the new metro, Grand Central, increasing tourism, the bid for the commonwealth games… the list went on and on.

“All that said, we were all struck by how little these strengths are promoted. It’s so important to market this region well and create a strong identity – it’s essential to attract further investment to the region. We won’t know for a while yet if Birmingham managed to maintain the record tourist levels it achieved in 2015 over the past 12 months, but it’s vital that we continue to invest in the region and welcome more people in to experience everything we have to offer.

“One of my favourite ideas to come out of the day was the suggestion that we create a landmark to instantly identify the West Midlands. The North east has The Angel of the North, we need something that shouts ‘WELCOME TO THE WEST MIDLANDS!’ to everyone who sees it. Personally, I’d like to see a landmark linked to the region’s manufacturing heritage.”

To find out more about the event and how to get involved, click here.