MOVING IN AT RATIO PARK: HIGH LEVELS OF INTEREST AT KIDDERMINSTER STARTER SITE

The first unit at Chase Commercial’s Ratio Park site in Kidderminster has been sold, as Harris Lamb reports strong interest in the newly completed development.

A total of 11 units, ranging from 900 sqft to 2,100 sqft, have been completed at the Fine Point Way site, especially designed to appeal to small and medium sized businesses and start ups.

A second phase to the park, offering units from 2,500 sqft to 10,000 sqft, is in the pipeline and conversations are ongoing with occupiers in this regard. 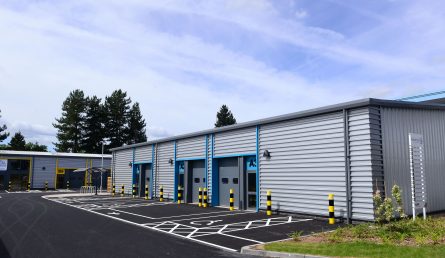 The first sale has now completed at the site – a 1,600 sqft unit to a Tills Direct, which has relocated from Bewdley and further announcements are expected with a number of deals being discussed.

Neil Slade, of Harris Lamb’s Agency team, said: “There has been strong interest in this site ever since Chase Commercial announced its intention to build this speculative development in order to create the supply to meet the ever-increasing demand for space.

“This is a rare freehold opportunity and with the site now completed and with the first deal completed, we’re confident that there will soon be a number of new businesses in occupation.”

With direct access to the main A451 Stourport Road, Ratio Park is adjacent to the Fine Point Business Park, a highly successful modern business park and home to a mix of commercial and office buildings.

Neil added: “These units have been created to meet the demand for smaller owner-occupier premises and it is expected the scheme will attract new and existing businesses, aid inward investment and generate a number of jobs, ensuring that Worcestershire continues as a thriving industrial hub.”

Harris Lamb is acting as joint agent alongside Fisher German.