HARRIS LAMB RAISES OVER £700 FOR UNEMPLOYED WOMEN IN NEED

Harris Lamb has raised over £700 to support unemployed women in need as part of an International Women’s Day initiative.

The business put three teams of five men and women together, each pledging to cycle 500 miles in the run up to International Women’s Day to support the Smart Works charity’s Spin 2020 challenge, which was organised to raise awareness of its work with unemployed women throughout the UK, and to help fund it.

The charity provides high quality interview clothes and interview training to unemployed women in need. Women are referred to Smart Works from organisations such as job centres, work programmes, prisons, care homes, homeless shelters and mental health charities. Half of the women put into contact with the charity have been unsuccessful in over 20 applications, and a third have been turned down from over 50 jobs.

After giving each woman an overhaul in terms of their personal image, the charity provides one-to-one interview coaching, after which 64 per cent of clients go on to get the job they apply for.

Abi Linford, who signed Harris lamb up to the challenge, said: “We really got into this challenge, jumping on our bikes before and after work and during our lunch breaks, and as predicted, it did turn into a bit of an internal competition as each team vied to beat the rival two. 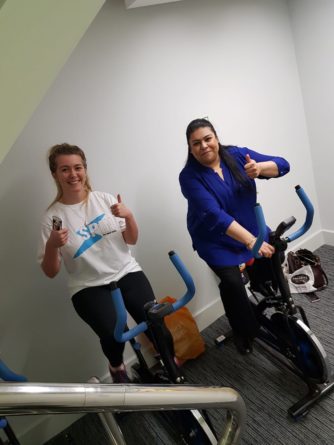 “The first team – made up of Andy Smith, Rob Harrison, Olivia Morris, Alex Eagleton and John Pearce – notched up 592.5 miles during the challenge, which ran from February 28th until March 8th, team two’s – made up of Fiona Mellor, Sam Silcocks, Sara Garratt, Shirley Greenlees and Charles Shephard – grand total was 514.5 miles, while myself, Andrew Groves, Andrew Burton, Heana Chauhan and Tina Cannon, who made up team three, cycled 541 miles over the 10-day period.

“In all, we raised £740.28 – some of which was raised by a cake sale within the business, where some of us made up for all the calories we’d burned off. We’re so pleased with our efforts – it’s been great fun and we feel like we’ve made an important contribution to a fantastic cause,” she added.

Abi added that Andy Smith of the business’ Lease Advisory team had cycled the furthest, with 175 miles under his belt, while Shirley Greenlees, of the Property Management department, was close behind with a 150-mile total.