The first occupiers at Tunstall Trade Park, the Stoke-on-Trent trade counter scheme developed by CWC Group, are now in situ and open for business.

Toolstation has now opened its doors at the site further to agreeing a lease at the 4,500 sq ft unit last summer, and Deputy Leader of Stoke City Council, Councillor Abi Brown joined CWC Group’s Marc Freeman to launch the park and welcome the business on site.

The first phase of development has now been completed with three deals already agreed by joint agents Harris Lamb and FHP. 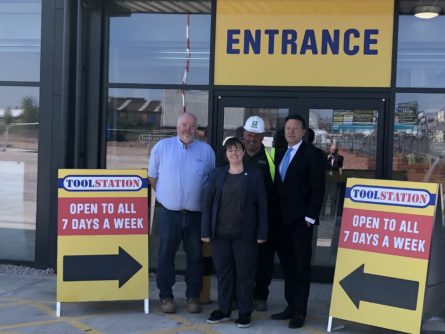 Andy Groves of Harris Lamb’s Agency team, said: ““It is great to see this scheme now up and running, with only two of the first phase of units remaining available, each offered to purchase or rent.

“We have a mix of both local occupiers and national names such as Toolstation taking space in the scheme and will announce further occupiers shortly plus further plans for the next phase of development on the site.”

Tim Gilbertson at FHP added: “With main road prominence, the scheme faces the A5271 Brownhills Road and offers terrific prominence close to other household names such as Topps Tiles, Aldi and Tile Mountain.

“With the benefit of Enterprise Zone status and extensive frontage to the main road, this is an ideal opportunity for any trade counter or indeed standard manufacturer or distribution occupier to buy or rent new build space in a market starved of opportunities. “