A charity bike-ride from Sutton Coldfield to Cardiff has raised an impressive £3,500 to help fund research into and prevention of Sepsis.

Andrew Groves of Harris Lamb formed part of Team Sollis – a group of 18 cyclists including survivors and relatives of Sepsis patients and several doctors and consultants who have treated patients with the condition, all of whom cycled 147 miles from Good Hope Hospital to meet up with other cyclists from around the UK at The Senedd, Cardiff. 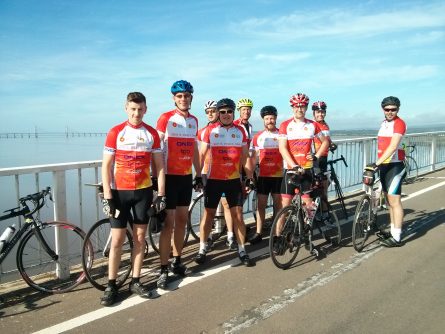 Some of Team Sollis take a breather on the Severn Bridge

The bike ride was organised to support the work of the UK Sepsis Trust in raising awareness about the 44,000 people who die in the UK every year from Sepsis and Septic Shock, a life threatening condition that arises when the body’s response to an infection injures its own tissues and organs. Sepsis leads to shock, multiple organ failure and death especially if not recognized early and treated promptly.

Andrew said: “I didn’t know a great deal about Sepsis until I got involved with this, but since speaking to former patients and medics, I’ve realised how many cases there are, and the staggering number of people who die from the condition every year.

“We set ourselves a £2,000 target and I’m delighted to say we’ve absolutely smashed it, with our current total sitting at £3,500. We met up with other teams from London, Devon and North Wales, and to date, we’ve a combined total of £13,000 , which is an outstanding amount.

“The ride was pretty tough in parts, but the team spirit and a great cause kept us all going. I hope the money will make a real difference for the charity and that our fundraising efforts will have also gone some way into raising awareness about the condition,” he added. 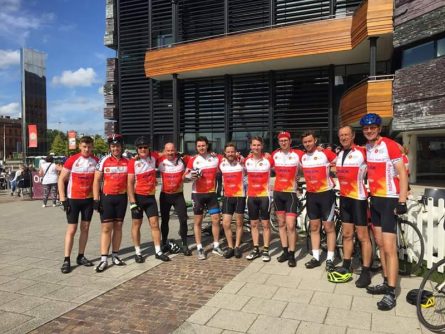 The team arrive in Cardiff Bay

To support the cause, visit Team Sollis’ JustGiving page: https://www.justgiving.com/fundraising/TeamSollis-Midlands