Demand for retail opportunities in Worcester’s thriving city centre is increasing as brands seek a presence, hinting at a very successful 2016 for traders in the city, Harris Lamb’s retail team has reported.

The second half of 2015 has seen a spike in enquiries for premium retail space within the city, with businesses including Fraser Hart jewellers, Tiger UK and L’Occitane securing outlets, and Lance Turner of the business’ Worcester office said that there had been an increasing number of internationally-owned retailers making enquries.

The most recent addition to the city, accessories retailer Tiger UK, which originated in Denmark. 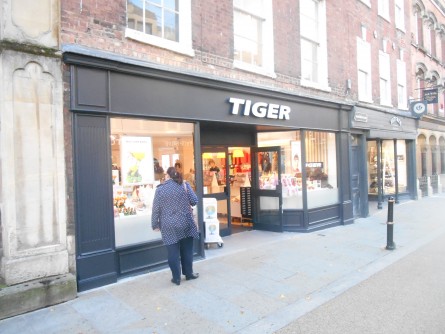 Lance said: “Tiger Accessories has launched a real retail assault on the UK in the last few weeks. The Worcester transaction moved very quickly, with the business taking on the High Street space in November and opening almost immediately to secure the pre-Christmas shopper market. The business plans a full refurbishment in the new year.

“We also let 54 Upper Tything, another prominent location within the city, to Just In2 Carpets, a transaction that took less than six weeks from us buying the property and letting it on the new owner’s behalf.

“Good retail space within Worcester is at a premium now and demand is high. Harris Lamb’s retail team is working to identify opportunities to meet that demand, but there really aren’t many empty spaces, Worcester is bucking the trend of many high streets with high levels of occupation,” he added.

“Key brands with a presence in the city are looking to expand their existing sites and other brands are keen to secure a presence of their own – the city is definitely experiencing a real boom and that’s a very positive thing for landlords and tenants alike as its offering to shoppers diversifies and expands.

“The outlook for 2016 is excellent – we’ll continue to work with clients to identify opportunities but the higher the demand, the better the scenario for retailers, as trader morale and the economy improves,” he added.

Adrian Field, Head of Worcester BID, agreed that business in the city was booming: “We are delighted that Worcester continues to offer a strong hook for new retail investment in the city centre, with vacancy rates well below the regional and national average at nine per cent. This is true for independent and multiple outlets as seen by the recent arrival of Tiger to the High Street as well as the renaissance of Reindeer Court which has seen seven new, high quality businesses arrive in the last 12 months.

“Established businesses have also demonstrated their faith in Worcester with Hawkins Bazaar for example relocating into larger premises and 6th generation independent jewellers Peplow undertaking an extensive refurbishment of their High Street business. Other multiple retailers are also considering larger premises within the city centre.”