Proud to be supporting Worcestershire LEP

The Harris Lamb team were amongst the guests at the Worcestershire LEP Conference on Friday, meeting a number of other successful businesses based within the county.
The LEP is one of the best performing in the UK, leading the county to be cited as World Class Worcestershire, and has today been named the most productive in England. 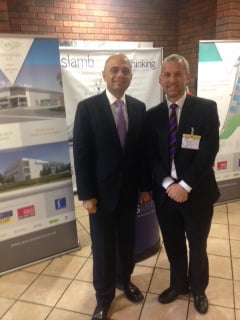 Business Secretary and Bromsgrove MP Sajid Javid spent time with the team finding out more about Harris Lamb’s work within the county and its role in marketing the £120 million technology park Worcester Six.
Worcestershire has seen the largest infrastructure and development land spend in the last 30 years with the ambition of creating 25,000 more jobs by 2025, and data released by the Office of National Statistics today have shown that its productivity growth has been the highest in England.
The latest ONS figures show that the region’s productivity grew by 2.7% between 2012-13, the fastest rate out of all 39 of the Local Enterprise Partnership areas. 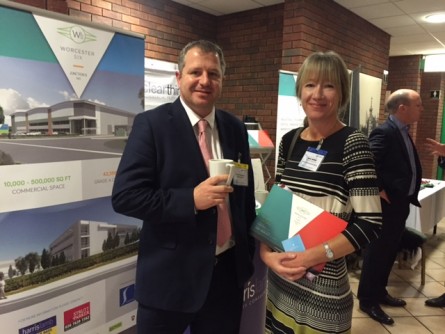 Charles D’Auncey with Helen Wilkes of the HCA

That is something to be enormously proud of. Business within the county is booming, and with developments such as Worcester Six in the pipeline, the ambition to bring 100 acres of prime employment land to market during 2016 is set to become a reality.
At the conference, Birmingham developer Stoford announced that it would be speculatively building two building, one of 45,000 sq ft and the other of166,000 sq ft , which would be funded by Liberty Properties, a USA based property fund which has completely bought into the Worcestershire LEP vision.

As agents for the Worcester Six development, we’re delighted to report strong interest in this prime site from potential occupiers and other professionals from the region.
For more details on the site, contact Andrew Lamb, Charles D’Auncey or Jacqui Bayliss of our Agency team