Harris Lamb has completed a hat-trick of lettings at a Leek business park, and having placed the final two units under offer, is celebrating it reaching full capacity. 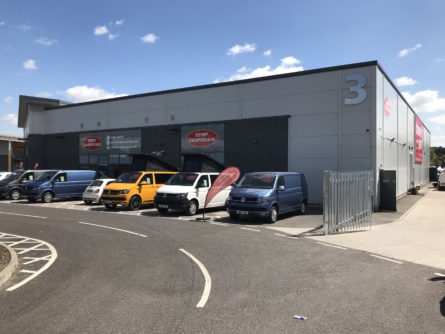 The modern business park offers a total floor-space of 60,000 sq ft, and Andy Groves, of Harris Lamb’s Stoke office, said that LCP’s investment into branding, refurbishment and signage had paid off and a number of new businesses have been attracted to the estate.

Macclesfield-based textiles firm Harding Yarns Ltd has taken a 10 year lease on the 8,911 sq ft Unit 1B, while Unit 3B, a 1,998 sq ft unit, has been taken on by internet retailer MQ Trading on a 10 year term.

A further 11,848 sq ft, at Unit 3G, has been let to Denby Campervans, a family run business, who moved from a smaller site near Leek town centre.

Andy said: “Denby specialises in the conversion of VW campervans, and as the business developed, it outgrew its previous building. The owners of the firm were attracted to the Churnet Park because of its prominent location and the high footfall created by the adjoining Sainsbury’s food store, and committed to a 10 year lease.

“The last two remaining units are now under offer, placing the site at full capacity. The estate has never been at 100 per cent capacity since its construction in 2012 despite the great quality of the units and its close proximity to the town centre.

“Ever since LCP acquired the park and committed to investing in improving the site and awareness around it, interest in the park has notably spiked and we’re delighted to have achieved several lettings in a relatively short period of time.”

Nicholas Burgess, MD at LCP, said that he was delighted that three local businesses had decided to set up their home at Churnet Park and hoped that the final two small units would soon be occupied by other local businesses from the surrounding area.