ERA FINDS NEW HOME AT i54

Construction has started at a development which will see security hardware and electronics business ERA, a division of Tyman plc, bring its existing facilities together at a new manufacturing, R&D and distribution facility near Wolverhampton.

Harris Lamb represented ERA in identifying a site and new manufacturing facility to house the expanding business for future growth. 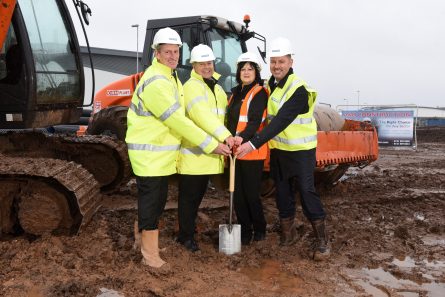 The 135,625 sq ft unit at the i54 business park will see ERA bring its three existing sites at Coventry, Willenhall and Wolverhampton, under one roof, leading commercial property developer Stoford announced.

The major development will provide a new high bay manufacturing and distribution facility with 25,000 sq ft of office space. It has been funded by Aberdeen Asset Management with land purchased from Staffordshire County Council.

Charles D’Auncey, Director of Harris Lamb , said: “ERA wanted a building and environment that would reflect the growing business, while continuing its established Wolverhampton presence.

“After a detailed search of the Black Country, we identified i54 as the preferred site, negotiated on and acquired the land, and following an interview process, selected Stoford as our development partner to construct the new facility within an agreed time frame.”

ERA will join occupiers such as Moog, Eurofins, ISP and Jaguar Land Rover which last year announced it would be doubling the size of its engine manufacturing centre at the business park.

ERA CEO Darren Waters said: “i54 is an outstanding business location with excellent transport links. It’s a great fit with our long term business strategy and will help to differentiate our brand, both as a supplier and leading employer.”

Dan Gallagher, joint managing director at Stoford, said: “ERA’s decision to move its operations to i54 is a significant milestone for the business park, marking the completion of phase 1.

“The park has brought considerable investment to the area and has led to the creation of a great number of jobs. Located within an Enterprise Zone and with direct access to the M54, it is a key strategic site with a number of major occupiers manufacturing and transporting goods across the country. We’re positive ERA will feel right at home.”

Staffordshire County Council’s economy leader, Mark Winnington, said: “i54 South Staffordshire is now renowned for leading global business and innovation. ERA has a proud industrial heritage and is now a leading player in home security products. The move to its new HQ will allow the company to continue to expand and innovate in modern, purpose-built facilities. We now look forward to Stoford, which is delivering other job boosting schemes in Staffordshire, starting the development very soon. ERA’s addition to i54 South Staffordshire is another significant milestone in the site’s development, bringing more investment and jobs to our area.”