A Northampton office building has been sold to a private buyer for more than £2.5 million in the latest of a series of deals that see commercial sites occupied by established businesses snapped up by savvy investors. 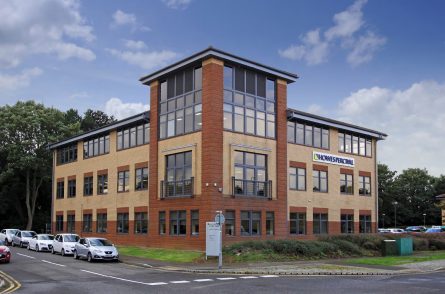 The building, which is let to law firm Howes Percival, is located in an established commercial centre with neighbours including Northamptonshire Chamber of Commerce, Redrow Homes and Tollers Solicitors.

Alex Eagleton, of Harris Lamb’s Investment team, said: “We are particularly pleased with the outcome of this investment as the sale price significantly exceeded the guide price.

“The opportunity attracted a great deal of interest from potential investors, and the resulting £2.7 million sale to a private buyer represented a 6.41 per cent yield.

“Opportunities like this – for office buildings occupied by reputable, established tenants on a long-term lease – represent very lucrative investments and with this particular building having been let to Howes Percival on a 15-year lease last August, demand from potential investors was high.

“The property currently produces a rental income of £179,720 a year, rising to £182,785 next year. Five-yearly review terms have been agreed with the option of a break at the end of the 10th year, assuring the successful bidder a long-term, secure income from an established source,” he added.

“Our team is dealing with a number of private investors keen to enhance their portfolios with both commercial and industrial sites occupied by secure, reputable tenants, and Nene House was one such opportunity.”

The deal is the latest in a number of investment transactions overseen by Harris Lamb in recent months, including the £16m sale of Gateway 28 in Nottingham, the sale of the multi-let Central Works industrial estate in Dudley, West Midlands, and the acquisition of the Trafford Industrial Park in Redditch.

The business is unable to identify either party involved in the deal.