THE DAY WE MET BLIND DAVE

It’s not every day you get to meet a living legend, but Team HL were lucky enough to do just that this week when Blind Dave Heeley joined us at our annual conference.
Usually found running seven marathons back-to-back or cycling hundreds of miles over a weekend, Blind Dave took time out of his training schedule to join us at Worcestershire County Cricket Club to share his wit and wisdom. 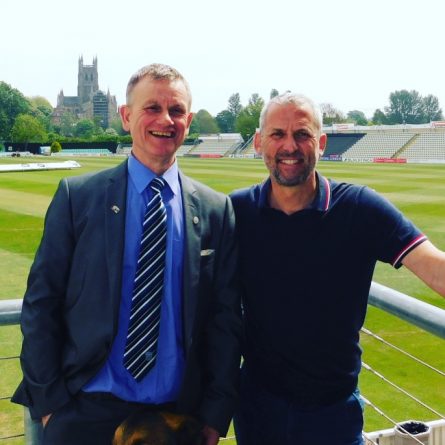 Having told us how he found he was losing his sight as a teenager and how it meant that two of his ambitions – to learn to drive and to join the army – were taken off the table, he went on to share tales of his achievements – not least completing seven marathons on seven continents in seven days, cycling 700 miles through seven countries in seven days – a charity challenge he completed alongside our very own Andy Lamb – and the Escape From Alcatraz triathlon (no mean feat for a bloke who couldn’t swim when he agreed to it).


Dave’s now working his way through his 2017 challenge – which will see him attempt to complete every Great Run of the year, culminating in Ethiopia in November.
Dave had one very clear message for us: there is no point dwelling on what you can’t do, better to concentrate every effort into what you can do, and what you want to do, and make it happen.
Andy said: “Dave is the most inspirational, incredible person I’ve ever met. His attitude and approach to life is fantastic and I wanted everyone here to experience it, learn from it, and hopefully, take some of that positivity away with them.”
It certainly worked – not only were many of us promising to channel his positive vibes from now on, but a fair few people are planning to dig their trainers out their trainers out this weekend – though a seven-marathons-in-a-week style goal may be a little optimistic. For now.