Construction work on sixspeculatively-built office buildings at Denby Hall Business Park in Derbyshire has completed, with three occupants already having snapped up space at the site.

The New Winnings Court development has been launched by Garner Holdings at the high quality, accessible business park to the north of Derby. 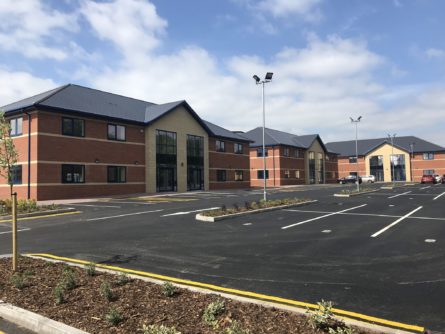 The high-specification buildings, which range from 1,944 sq ft to 4,346 sq ft , boast features including brick and feature stonework, raised floors, air conditioning and generous car parking, and are available to rent or buy.

Rob Haigh, of Harris Lamb’s East Midlands-based Agency team, who is marketing the site along with joint agents CCP, said that there had been high levels of interest from potential tenants and buyers off plan, with the smallest of the units already let, and two further offices under offer.

Rob said: “We are delighted with the early interest in this scheme, and with three of the six units already earmarked, with one having been let to IT providers Axess Systems, and two 2,716 sq ft units under offer, we anticipate the remaining 50 per cent of them to be quickly snapped up.

“Garner Holdings’ decision to speculatively build on the site was a real boost for the region, where there has been a shortage of good quality stock following a decade with no speculative development.

“We’re confident the location and high-specification of New Winnings Court will quickly see it at full occupancy, with further demand for similar stock within the region,” he added.